Doras provided refugee resettlement support from early 2015 to the end of 2019, to people in Laois, Limerick and Wexford under the Irish Refugee Resettlement Programme.

Refugee Resettlement is a term used to describe the selection and transfer of refugees from a country of asylum to a third country which has agreed to admit them and in which refugees can permanently settle. People who participate in Refugee Resettlement are known as “programme refugees”. “Programme refugees” have been resettled to 29 different communities across Ireland to date.

Doras has provided refugee resettlement support to communities in Ireland from early 2015 to the end of 2019, with projects in counties Laois, Wexford and Limerick. Doras have since developed expertise and a range of resources in this area of resettlement, including the 2020 Refugee Resettlement Toolkit, which we are pleased to share with service providers to ensure effective integration of refugees in Ireland. To view and download a copy, please click here.

In February 2015, Doras was successfully awarded the tender by Laois County Council to be the implementing agency of the Portlaoise Syrian Programme Refugee Resettlement Project. The Programme objectives were to support the reception and integration of 54 Syrian refugees resettled in Portlaoise: supporting refugees on a daily basis to access services appropriately, and building capacity both in the new arrivals and in the receiving community as the refugees adapt to their new life in Portlaoise. The Project was funded by the Office for Promotion of Migrant Integration (OPMI) and forms part of the Government commitment to its Resettlement strategy.

A dedicated full time Resettlement Worker was appointed and acted as the central co-ordination point for both statutory and non-statutory agencies and the families. Laois County Council generously provided a centrally located office in the town centre, which was the central hub of the Project and was officially opened in March 2015.

The Project officially closed in June 2016 and most aspects of the Project have now been mainstreamed. We are fortunate to have at least 2 volunteers who will be able to continue to offer weekly Drop-in and signposting surgery from September 2016. We also have 13 Family Advocate Volunteers, who are continuing to provide support to families.

The Doras-led Portlaoise Social Inclusion Network was established as part of this work and has become the Laois Integration Network (LIN), with continued support from Doras. The LIN continues to meet monthly to ensure long term sustainability of integration and community initiatives locally. We are delighted that Laois Partnership has supported this initiative with a wide range of other partners.

In May 2017, Doras began work on year two of the Limerick Refugee Resettlement Programme, supporting 86 Syrian and Iraqi refugees from 19 families – 14 of which were in Limerick City and 5 in Newcastle West, County Limerick. These families were supported by the Doras Resettlement Support Officer, who worked daily to connect new arrivals with receiving communities. They also linked new arrivals with service providers including: Paul Partnership, local ETBs, University of Limerick, Limerick Youth Service, childcare providers and many more. The Resettlement Support Officer also facilitated the Family Advocate Programme, which linked new families with volunteer-advocates, which helped to provide more personal, informal support systems as well as establish local social networks.

In April 2017 Doras began working as the refugee resettlement agency in Co. Wexford. Over the next two years the staff and local communities welcomed 221 Syrian and Iraqi refugees to Wexford town, Enniscorthy, New Ross and Gorey. The Doras team was comprised of two Resettlement Officers, two Inter-Cultural workers and a project coordinator. The Doras team worked with local agencies and over 30 local volunteers to support the reception and inclusion of the 47 new families which included supports for children and young people, interpretation, language learning, further education, training, employment, and health and wellbeing supports. The Doras team ran a series of successful community events in collaboration with local organisations including Human Libraries, Community Picnic, GAA experience days, and Newroz celebrations.

For more information on Ireland’s refugee resettlement programme, including statistics and an outline of the process, visit the Office for the Promotion of Migrant Integration (OPMI) website at www.integration.ie (link to external site).

Doras staff designed and developed a range of resources and templates* to effectively and professionally deliver a high quality service. In 2020, these were collated and published as the Refugee Resettlement Toolkit, an open source guide for resettlement work: 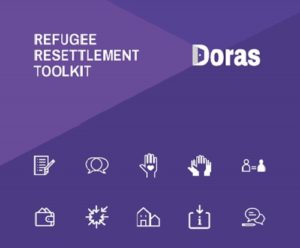 *We would be grateful if you could let us know if you are planning to adapt these templates to use in your own organisation/ work. If you have any other feedback or have any questions about this work, please contact us!

We will call you back soon